This video was edited by VideoTov.

It all started way back in my tenth-grade Spanish class. My best friend, Tai, and I did a project about Machu Picchu, and we instantly fell in love with it. We decided that someday we would go there together. Fifteen years later, we finally made it. 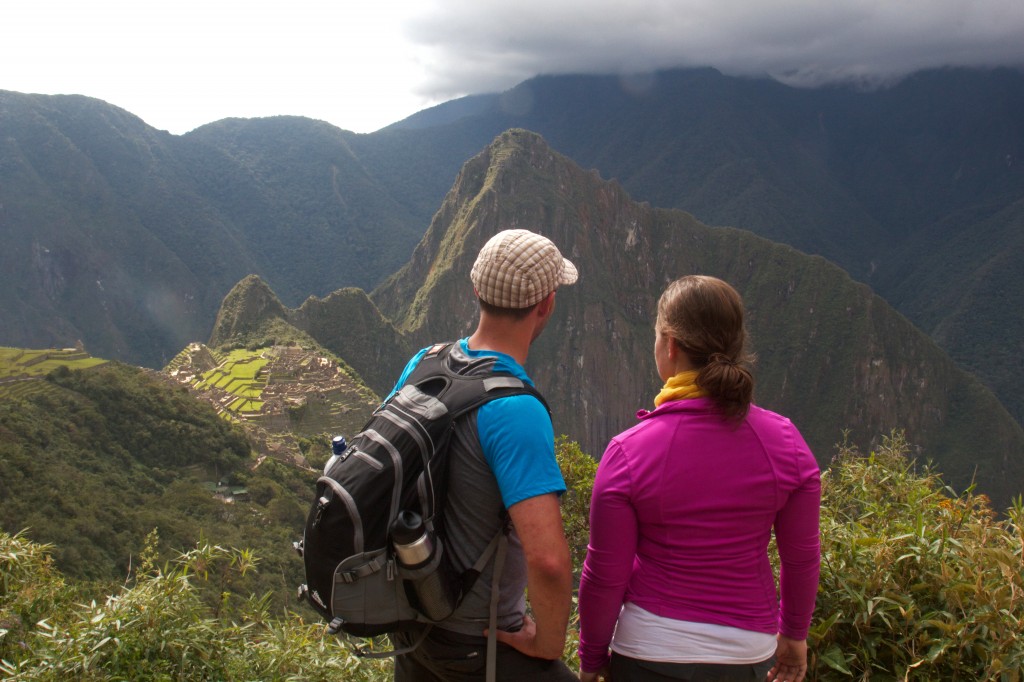 We only had three weeks to spend in Peru, so we packed them as full as possible—a four-day trek to Choquequirao, a one-day Inca Trail trek to Machu Picchu, and a five-day rainforest adventure in Manú National Park, plus a little resting time in Cuzco and Lima. Along the way, I shot video from a Polaroid XS100 sport camera (basically a GoPro knockoff), and Tai took photos with his Canon T2i SLR camera.

When we got home, I couldn’t wait to make a video of our trip. I’ve been writing for VideoTov for a year now, but this was my first time making a video. Before I started, I sort of knew how I wanted it to go (chronological-ish, by place) and the kind of music I wanted (Peruvian, with one traditional song and one cumbia song). After a week and a half of listening to pan-flute music on Spotify, I found the perfect songs, so I started gathering my files for the video.

I uploaded 160 files, which I thought would be totally overwhelming for my video editor, Anthony Gourdine. But he quickly turned them into a five-and-a-half minute travel video that includes all the highlights of our trip. Anthony explained that the key to making all those files into a coherent video is organization.

“When working with that many files (or any amount of files) it pays to keep the files organized and know where what goes with what. Without the big O, editing would just be chaotic, making it hard to function as an editor. In this industry you hear the famous quote all the time, ‘Work smarter, not harder.’”

I had a few specific shots I wanted in certain places, but I left most of the decisions to Anthony, who has an excellent eye for putting footage together and an amazing ability to time it to music. I asked Anthony how he gets the footage to synch up with the music so well. Does he start with the song and look for footage that goes with the beat? He said no, actually.

“The funny thing about that is that I don’t really use the song to do any specific timing. Once the clips are in the timeline I place the music to what I have cut and see if they match up together, kinda like it’s a game,” he explained. “Of course, if the clip doesn’t match the beat or the cue, I adjust for it.”

Making this kind of video is something I never, ever would have tried on my own. I don’t have the patience or the drive to learn video-editing software, but even if I did try to learn how to edit videos, I’m sure my work would still look amateurish in comparison to this.

“There is a lot that goes into video editing or the whole post experience,” Anthony pointed out. “I have to play many roles with these projects. I have to be assistant editor, assembly editor, and finishing editor dealing with color and sound, and sometimes there are even motion graphics. But I love what I do, and I wouldn’t change anything about it.”

Thanks to VideoTov, making a professional travel video was really easy—I just decided what I wanted and then left the hard stuff to Anthony. And now I have a movie of our Peruvian adventure that I can watch over and over. I hope you like watching it, too.

Here a few behind-the-scenes notes about the video:

This is one of the most beautiful Inca ruins, but very few people go to see it because getting there is so hard. To reach the ruin, you have to trek 68 kilometers (42 miles), descending 1,500 meters (4,900 feet) and then climbing back up 1,500 meters. The trip takes two days in and two days out. It’s not surprising, then, that Choquequirao only gets about 2,000 visitors a year (compared to Machu Picchu’s 2,500 a day).

It was the most grueling hike of our lives, but when we reached our destination, we were the only people there. Our guide, Antony, led us through a ritual honoring the ruin, which had been a spiritual-pilgrimage destination for Incas 500 years ago. Despite the exhaustion and the fly bites and the vomiting and the blisters, we felt very lucky to be there. 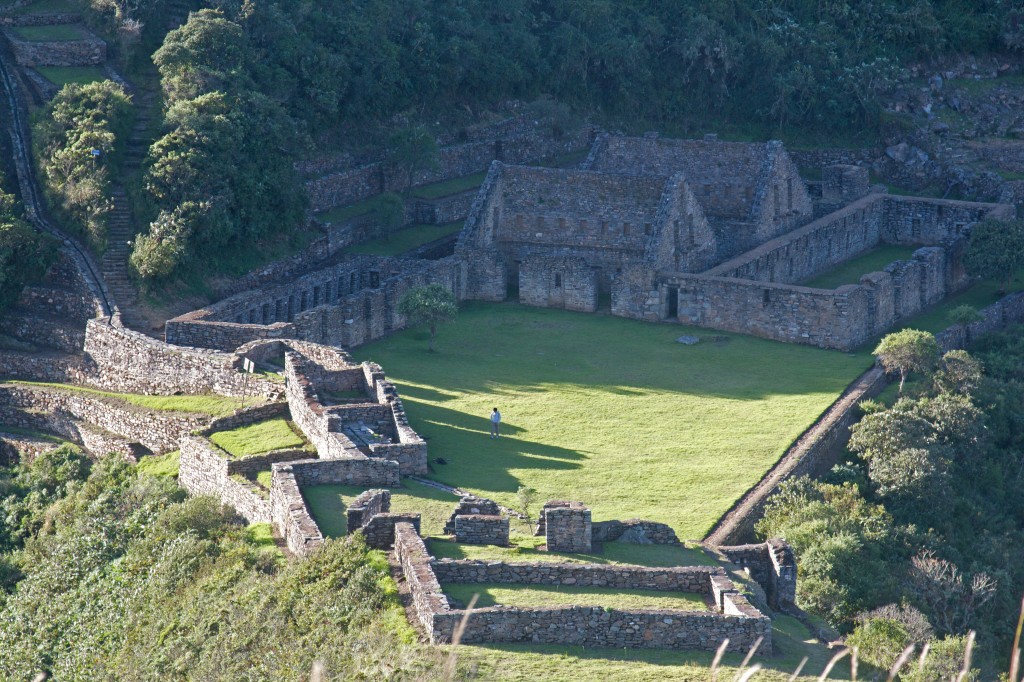 After the Choquequirao trek, a one-day hike was a piece of cake. We took the train from Ollantaytambo to one of the many offshoots of the Inca Trail and worked our way up the mountain. 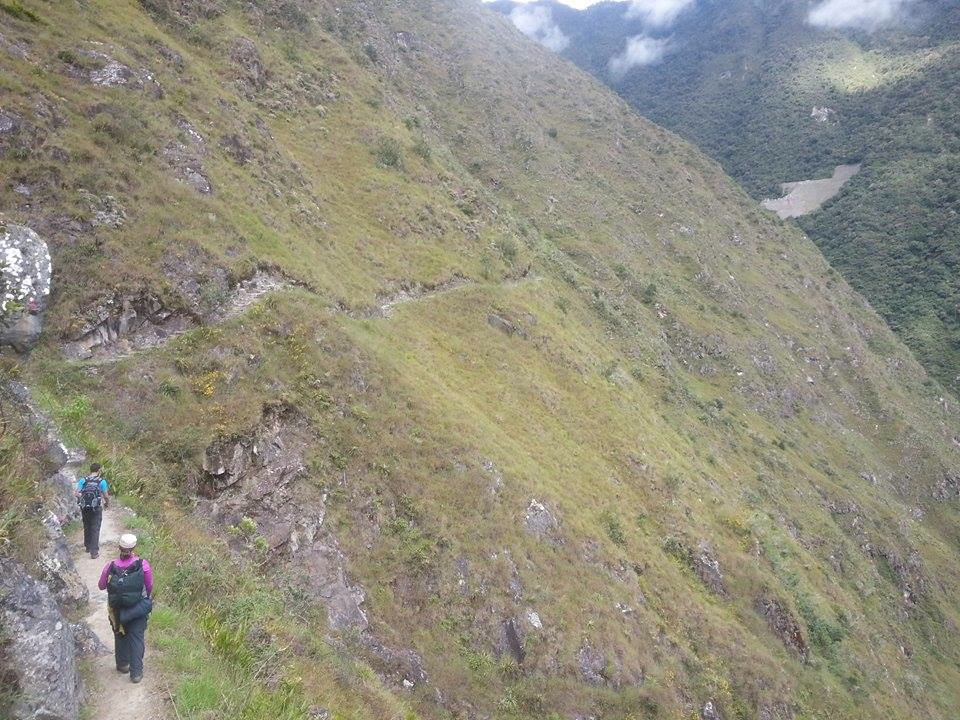 We stopped at another impressive ruin, Wiñay Wayna, before emerging through the Sun Gate to see Machu Picchu in the distance (see pic at top of post).

I don’t have words to do justice to the majesty of Machu Picchu. It is bigger and more complex than you would ever imagine, with a working running-water system and terraced agriculture. The whole city was built in the 1400s on top of a steep mountain with rustic tools and without hauling animals. Machu Picchu was so important to the Incas that they abandoned the city rather than let the Spaniards ransack it. For 400 years it was buried under jungle foliage, known only by locals, until Hiram Bingham discovered it in 1911. Since then, it’s become one of the most famous archaeological sites on the planet, rightly claiming its place as one of the New 7 Wonders of the World. 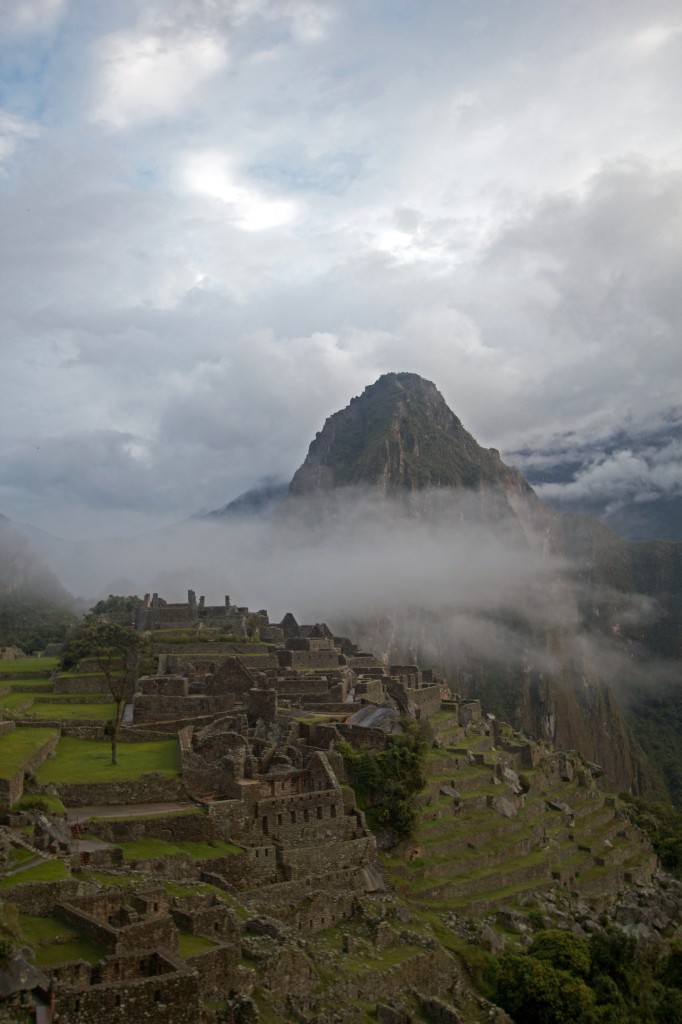 We spent that afternoon and the whole next day exploring the ancient city, and despite being crammed in with 2,498 other tourists, we were completely blown away by the experience. It fully lived up to our fifteen years of anticipation.

Cuzco was the capital of the Inca Empire and then the capital of the Spanish Empire. Now it’s where tourists go to party in between treks. Most of our time in Cuzco was spent showering and doing laundry after our excursions, but we did find time to wander the narrow streets and visit the churches. We also got to try a local dish, cuy, which is—yes, you saw that right in the video—guinea pig. Honestly, it wasn’t too bad. More skin than meat, really. I will admit it was kind of hard to eat because they leave the whole thing intact, so you can see its little teeth and claws. We felt some guilt. 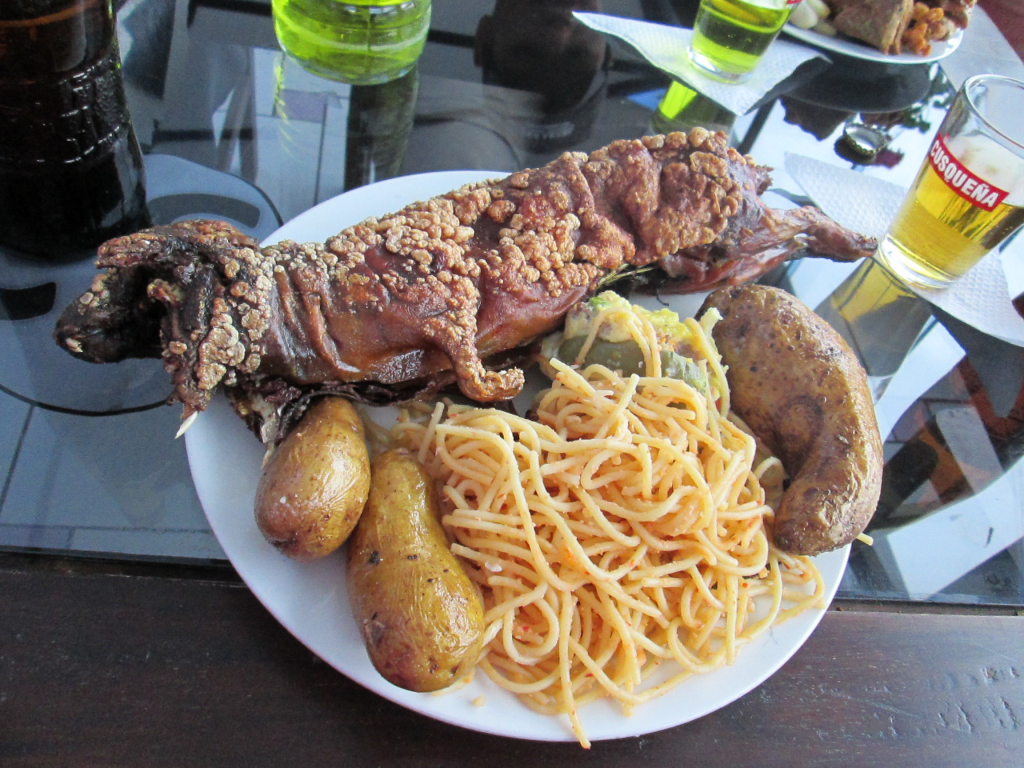 With a group of nine other people, we set off to visit some of Peru’s most pristine rainforest. We took a boat down the river to a remote jungle lodge. We followed our guides, William and Moses, deep into the canopy, learning about the plants and animals we passed. We soaked in a hot spring and cooled off in the river. We saw monkeys, bats, giant snails, a caiman, and prehistoric chickens. It was incredible. 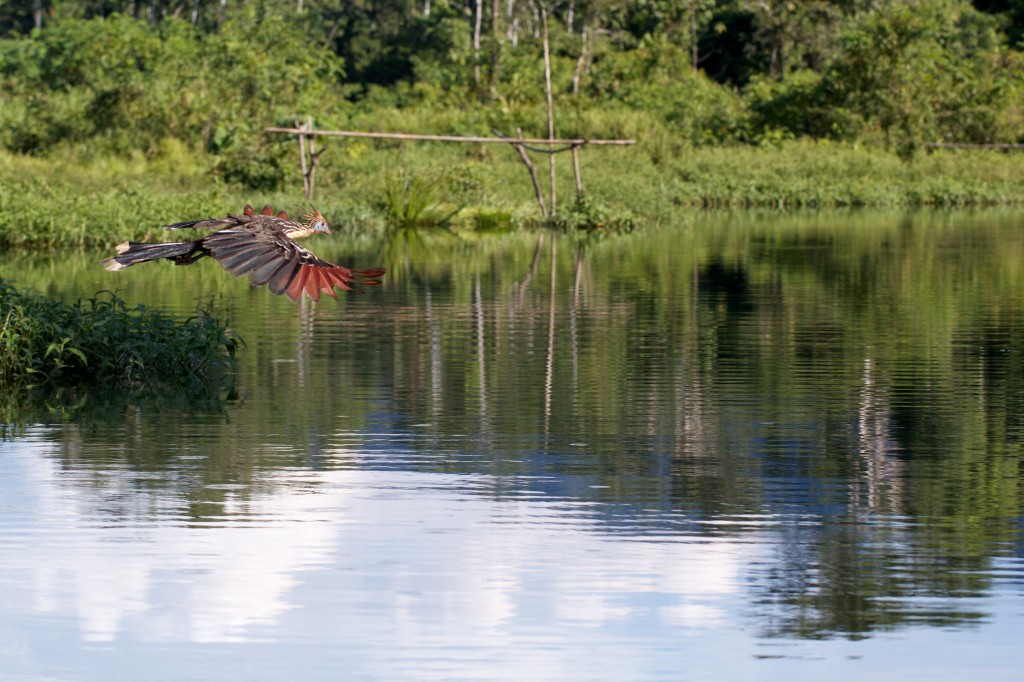 Lima is situated on a high cliff overlooking the Pacific Ocean. Surfers ride waves below and hang gliders circle above. Miraflores, the touristy neighborhood, is overrun with Americans and Europeans, but on weekends locals come down to Parque Kennedy (a.k.a. Parque los Gatos) to eat, dance, and play with the many feral cats who live there. We only had a few days in the capital, but we wished we’d had more. Next time we go to Peru, we’ll spend more time there. 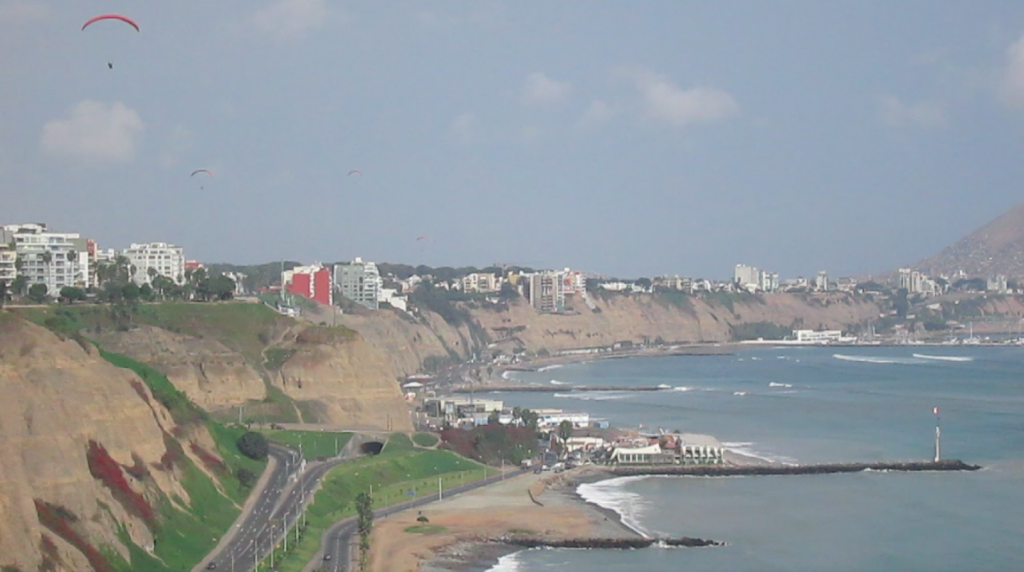 We’re so happy that we got to have this once-in-a-lifetime adventure, and that we get to share it with you. Enjoy the video.